In the last century, the development of electron microscopy and X-ray diffraction has afforded a remarkable tool for imaging and resolving the three-dimensional structure of matter with atomic resolution, has had a great impact in many different fields. Recently, the fourth-dimension, “time”, has been introduced for probing matter dynamics, by utilizing electron bursts. The generation of ultrafast (picosecond and femtosecond) electron pulses paves the way for establishing Ultrafast Electron Diffraction (UED), Ultrafast Electron Microscopy (UEM), and Scanning Ultrafast Electron Microscopy (SUEM) as essential tools in these fields. These tools enable the recording of images of the structural dynamics and atomic motion in real-time and space. Already, they have found numerous applications in chemistry, physics, biology, and materials science.

Currently, the research activities in the field focus on improving both the spatial and temporal resolutions in order to resolve the ultrafast dynamics of matter with better contrast. In UED and UEM experiments, the temporal resolution is defined by the electron pulse duration and its synchronization stability with the triggering optical pulses. However, the electron pulse suffers from a temporal broadening due to the space-charge effect and energy dispersion during its propagation from the source to the sample, which ruins both the temporal and spatial resolutions. Therefore, many electron-pulse compression techniques have been developed for controlling the space-charge effect and generating ultrashort (bright) electron pulses. These techniques enable the confinement of the electron pulse to within a hundred femtoseconds. However, it still suffers from time jittering and temporal synchronization issues, which limit the temporal resolution response in time-resolved electron experiments. Therefore, the ultrafast dynamics measurements that have been carried out so far are in the timescale of picosecond to several hundreds of femtoseconds. Therefore, the imaging of faster dynamics (i.e. electron dynamics) in matter still remains beyond reach.

Our research focuses on enhancing the temporal resolution of electron microscopy to achieve a few tens of femtoseconds to hundreds of attoseconds resolution by the optical gating approach, which we first demonstrated in 2015 by imaging electron motion in real-time and space PNAS, 112, 12944-12949, (2015).

The principle of the optical gating approach can be explained as follows: free electrons and laser pulses (photons) interact via inelastic scattering on a nanostructure. This interaction causes the electrons to gain (or lose) one or more photon quanta—but only in the presence of the optical laser pulse. Hence, the optical pulse is a temporal optical gate for these electrons that have a temporal profile similar to the gating window (i.e., the optical laser pulse duration). Then, these gated electrons, which can be resolved as side peaks around the zero-loss peak in the electron energy spectra (Figure 1), are filtered out to obtain ultrashort, attosecond-scale electron pulses. Such pulses will provide a significant enhancement to temporal resolution in UEM and UED for exploring the ultrafast dynamics of matter triggered by another ultrashort optical laser pulse.

Generation of the Shortest Electron Pulse

Exploiting the optical gating approach, we generated and demonstrated, to our knowledge, the shortest (30 fs) isolated electron pulse achieved inside UEM. Accordingly, the temporal resolution in UEM is enhanced by more than an order of magnitude (16 times). Nature Photonics 11, 425–430 (2017). This advancement permits the resolution and imaging of fast atomic motion and electron dynamics which occur on the scale of a few tens of femtoseconds.

In optical gating, the gated electron pulse duration depends on the temporal gating window, which is defined by the optical gating pulse duration. Therefore, the optical attosecond pulse would provide the sub-femtosecond temporal gating resolution desired to generate isolated attosecond electron pulses. Moreover, extreme phase stability can be achieved between the pump and gating laser pulses by phase-locking. Together, they enable the ability to attain attosecond temporal resolution in electron microscopy, establishing the field of “Attomicroscopy”. This accomplishment will open new avenues of research, allowing for an enormous number of femtosecond and attosecond electron imaging applications in different areas and enabling the recording of electron motion in real-time. 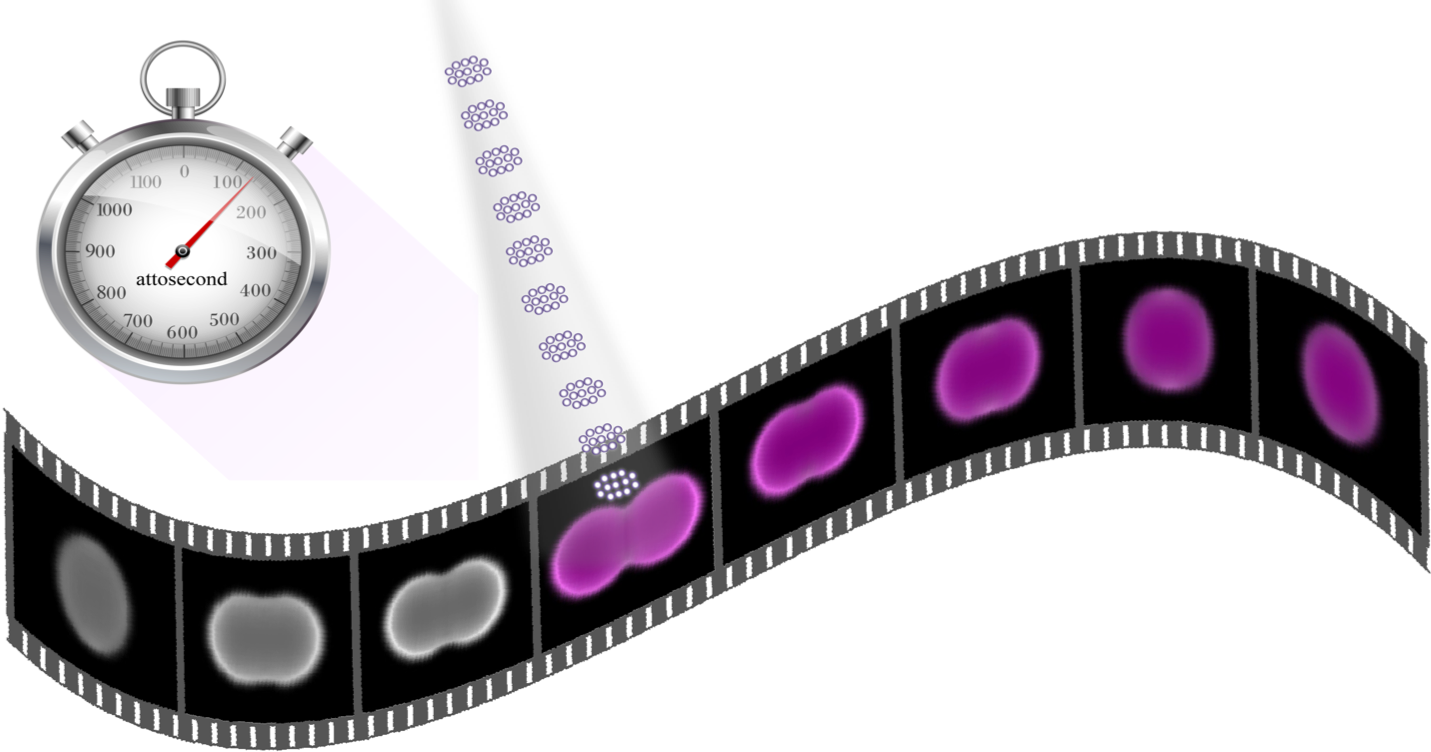